Stephen M. Van Natten joined the D’Amato Law Firm in 2014 after a distinguished career as a prosecutor for the Lehigh County (PA) Office of the District Attorney.  After having prosecuted thousands of cases, hundreds of jury and non-jury trials over more than 20 years, he brought his considerable trial skills to the D’Amato Firm.  He has worked together with his partners, Paul and Alexa, on hundreds of cases, striving to reach fair settlements and fight for just verdicts at trial.  He brings his passion for helping victims of crimes to those now in need of justice in the personal injury realm.  It is helping those that have suffered at the hands of someone else’s negligence that motivates him to fight for their rights.

He is a 1986 graduate of Brick Memorial High School in Brick, New Jersey. He received his Bachelor of Arts degree in Political Science from DeSales University, Center Valley, PA (formerly Allentown College of St. Francis de Sales) in 1990. Stephen then obtained his Juris Doctorate Degree from Widener University – School of Law, Harrisburg, PA in 1993. He became licensed to practice law in Pennsylvania and joined the Lehigh County District Attorney’s Office in December of 1993.  In 2007, after more than a decade with the County of Lehigh, he was promoted to the position of the Chief of the Violent Crimes Unit and Chief of Prosecutions for the office, supervising prosecutors as both the Unit Chief and overseeing all prosecutions in the office.  In 2014 he sat for and passed the New Jersey Bar Exam and relocated to South Jersey when he joined the firm.

Stephen also spent 17 years as an Adjunct Professor of Business Law for Pennsylvania State University at the Lehigh Valley Campus in Center Valley, PA, receiving the “Part-Time Faculty Teaching Excellence Award” at the Honors Convocation in 2006 as well as being recognized by “Who’s Who Among America’s Teachers” as a distinguished educator for his excellence and his contributions to “the education of our nation’s youth.”

Stephen has guest lectured at various high schools and colleges in the Lehigh Valley area, was a Certified Instructor for the Allentown Police Academy and has lectured for the Pennsylvania District Attorney’s Association.  Stephen continues to lecture on the law to high school students at Mainland High School and Cumberland Regional High School.

In 2014, Stephen was honored by having his photograph and biography hung in the main hall on the DeSales University Campus as a distinguished alumnus in the “Alumni Spotlight” series.

In 2018, Stephen became the Grand Knight of the Ocean City (Council 2560) Knights of Columbus.

Stephen has two children, Jessica, an Associate Producer with A&E in New York City and Alexander, a welder for Greiner Industries, who lives in Whitehall, PA.  He lives in Ocean City with his Wife, Dr. Shelleymarie Magan, who is the Chief School Administer/Superintendent for the Myron L. Powell School in Cedarville, and their beloved Boston Terrier, Lexus.

Office of the Lehigh County Department of Law
Allentown, Pennsylvania

Associations and Affiliations (past) 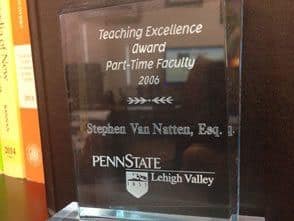 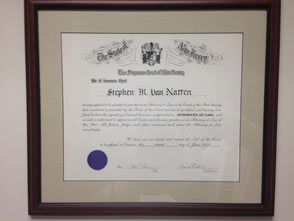 Who’s Who Among
America’s Teachers